The History of LEDs and LED Technology

Back to Technical Articles
Light Emitting Diode (LED) is essentially a PN junction semiconductor diode that emits a monochromatic (single color) light when operated in a forward biased direction. The basic structure of an LED consists of the die or light emitting semiconductor material, a lead frame where the die is factually placed, and the encapsulation epoxy which surrounds and protects the die (Figure 1). The first commercially usable LEDs were developed in the 1960’s by combining three primary elements: gallium, arsenic and phosphorus (GaAsP) to obtain a 655nm red light source. Although the luminous intensity was very low with brightness levels of approximately 1-10mcd @ 20mA, they still found use in a variety of applications, primarily as indicators. Following GaAsP, GaP, or gallium phosphide, red LEDs were developed. These devices were found to exhibit very high quantum efficiencies, however, they played only a minor role in the growth of new applications for LEDs. This was due to two reasons: First, the 700nm wavelength emission is in a spectral region where the sensitivity level of the human eye is very low (Figure 2) and therefore, it does not “appear” to be very bright even though the efficiency is high (the human eye is most responsive to yellow-green light). Second, this high efficiency is only achieved at low currents. As the current increases, the efficiency decreases. This proves to be a disadvantage to users such as outdoor message sign manufacturers who typically multiplex their LEDs at high currents to achieve brightness levels similar to that of DC continuous operation. As a result, GaP red LEDs are currently used in only a limited number of applications. As LED technology progressed through the 1970’s, additional colors and wavelengths became available. The most common materials were GaP green and red, GaAsP orange or high efficiency red and GaAsP yellow, all of which are still used today (Table3). The trend towards more practical applications was also beginning to develop. LEDs were found in such products as calculators, digital watches and test equipment. Although the reliability of LEDs has always been superior to that of incandescent, neon etc., the failure rate of early devices was much higher than current technology now achieves. This was due in part to the actual component assembly that was primarily manual in nature. Individual operators performed such tasks as dispensing epoxy, placing the die into position, and mixing epoxy all by hand. This resulted in defects such as “epoxy slop” which caused VF (forward voltage) and VR (reverse voltage) leakage or even shorting of the PN junction. In addition, the growth methods and materials used were not as refined as they are today. High numbers of defects in the crystal, substrate and epitaxial layers resulted in reduced efficiency and shorter device lifetimes.

Gallium Aluminum Arsenide It wasn’t until the 1980’s when a new material, GaAlAs (gallium aluminum arsenide) was developed, that a rapid growth in the use of LEDs began to occur. GaAlAs technology provided superior performance over previously available LEDs. The brightness was over 10 times greater than standard LEDs due to increased efficiency and multi-layer, heterojunction type structures. The voltage required for operation was lower resulting in a total power savings. The LEDs could also be easily pulsed or multiplexed. This allowed their use in variable message and outdoor signs. LEDs were also designed into such applications as bar code scanners, fiber optic data transmission systems, and medical equipment. Although this was a major breakthrough in LED technology, there were still significant drawbacks to GaAlAs material. First, it was only available in a red 660nm wavelength. Second, the light output degradation of GaAlAs is greater than that of standard technology. It has long been a misconception with LEDs that light output will decrease by 50% after 100,000 hours of operation. In fact, some GaAlAs LEDs may decrease by 50% after only 50,000 -70,000 hours of operation. This is especially true in high temperature and/or high humidity environments. Also during this time, yellow, green and orange saw only a minor improvement in brightness and efficiency which was primarily due to improvements in crystal growth and optics design. The basic structure of the material remained relatively unchanged.

To overcome these difficult issues new technology was needed. LED designers turned to laser diode technology for solutions. In parallel with the rapid developments in LED technology, laser diode technology had also been making progress. In the late 1980’s laser diodes with output in the visible spectrum began to be commercially produced for applications such as bar code readers, measurement and alignment systems and next generation storage systems. LED designers looked to using similar techniques to produce high brightness and high reliability LEDs. This led to the development of InGaAlP (Indium Gallium Aluminum Phosphide) visibleLEDs. The use of InGaAlP as the luminescent material allowed flexibility in the design of LED output color simply by adjusting the size of the energy band gap. Thus, green, yellow, orange and red LEDs all could be produced using the same basic technology. Additionally, light output degradation of InGaAlP material is significantly improved even at elevated temperature and humidity. Current Developments of LED Technology

InGaAlP LEDs took a further leap in brightness with a new development by Toshiba, a leading manufacturer of LEDs. Toshiba, using the MOCVD (Metal Oxide Chemical Vapor Deposition) growth process, was able to produce a device structure that reflected 90% or more of the generated light traveling from the active layer to the substrate back as useful light output (Figure 4). This allowed for an almost two-fold increase in the LED luminance over conventional devices. LED performance was further improved by introducing a current blocking layer into the LED structure (Figure 5). This blocking layer essentially channels the current through the device to achieve better device efficiency. As a result of these developments, much of the growth for LEDs in the 1990’s will be concentrated in three main areas: The first is in traffic control devices such as stop lights, pedestrian signals, barricade lights and road hazard signs. The second is in variable message signs such as the one located in Times Square New York which displays commodities, news and other information. The third concentration would be in automotive applications. The visible LED has come a long way since its introduction almost 40 years ago and has yet to show any signs of slowing down. A Blue LED, which became available in production quantities in the 1990’s, resulted in an entire generation of new applications. Blue LEDs because of their high photon energies (>2.5eV) and relatively low eye sensitivity have always been difficult to manufacture. In addition the technology necessary to fabricate these LEDs is very different and far less advanced than standard LED materials. The blue LEDs available today consist of GaN (gallium nitride) and SiC (silicon carbide) construction with brightness levels in excess of 10,000mcd @ 20mA for GaN devices. Since blue is one of the primary colors, (the other two being red and green), full color solid state LED signs, TV’s etc. have become commercially available. Other applications for blue LEDs include medical diagnostic equipment and photolithography. 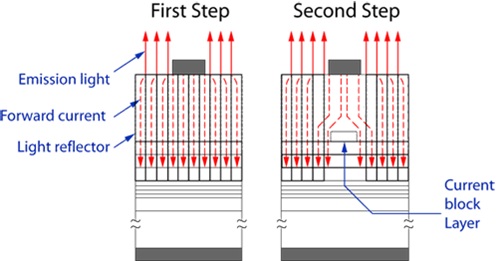 LED Colors It is also possible to produce other colors using the same basic GaN technology and growth processes. For example, a high brightness green (approximately 500nm) LED has been developed that has replaced the green bulb in traffic lights. Other colors including purple and white are also possible. With the introduction of blue LEDs, it is possible to produce white by selectively combining the proper combination of red, green and blue light. This process however, requires sophisticated software and hardware design to implement. In addition, the brightness level is low and the overall light output of each RGB die being used degrades at a different rate resulting in an eventual color unbalance. Another approach taken to achieve white light output, is to use a phosphor layer (Yttrium Aluminum Garnet) on the surface of a blue LED. In summary, LEDs have gone from infancy to adolescence and are experiencing some of the most rapid market growth of their lifetime. By using InGaAlP material with MOCVD as the growth process, combined with efficient delivery of generated light and efficient use of injected current, some of the brightest, most efficient and most reliable LEDs are now available. This technology together with other novel LED structures will ensure wide application of LEDs. New developments in the blue spectrum and on white light output will also guarantee the continued increase in applications of these economical light sources.