Back to Technical Articles
LEDs – Dominating Lighting Technology If there were ever any question that LEDs would be such a dominating lighting technology just take a look around. They are virtually everywhere. From standard indicators on stereo equipment, laptops and toys to traffic lights, variable message signs and automotive lighting, LEDs have enjoyed an explosive growth over the last several years with no end in sight. Much of this is due to the ever-increasing levels of brightness being achieved with new materials and wafer fabrication processes as well as the advent of blue and white LEDs for RGB (Full Color) and general illumination applications. As the level of sophistication for using LEDs rises, so does the need for accurate measurements of the LEDs optical properties. I have been in the Optoelectronics industry for nearly 25 years now and by far the most common type of question I am always asked is related to the measurement of an LED. (What is a lumen? How do I convert from lumens to candela? How do I accurately measure brightness? Why is my measurement not the same as yours?) I hope to address these and many similar issues in the subsequent article. The details of optical measurement in this discfstaussion will be broken down into four separate but interrelated topics. These are: Photometric quantities, Radiometric quantities, Wavelength or Chromaticity quantities and finally Angular or Goniometric quantities. Although an entire book can easily be written on the units, standards and test methodologies of the above, I will try to summarize the more common and basic areas of interest.

Photometry Photometry is simply the measurement of light in the visible spectrum (approximately 380nm-770nm). This is light seen by the naked eye of an average human observer. There are many different types of photometric units such as nits (cd/m2), lux (lumen/m2), footcandles (lumen/ft2), stilb (cd/cm2) etc. All of these are based on two basic photometric standards, the LUMEN and the CANDELA. The Candela is the unit of luminous intensity, which can be defined as the amount of luminous flux (total luminous power emitted from a source and expressed as lumens) per unit solid angle in a given direction. The Lumen can be defined as the luminous flux emitted per unit solid angle from a uniform point source whose luminous intensity is 1 candela. (1 candela = 1 lumen/steradian) It is also important to understand the definition of steradian, which is the solid angle (cone) at the center of a sphere of radius “r” that subtends an area “r2” on the surface of the sphere. (See figure 1) The surface area of a sphere is 4π r2; therefore, a sphere has 4π steradians. Most standard LEDs supplied today are measured in candelas, however, due to the increasing demand for LEDs as a replacement to incandescent in the general illumination market, the Lumen is now often used as a unit of measurement for light output. A simple method for converting from Candela to Lumens is shown in Figure 2 (below). Step 1.) Obtain the Solid Angle of the LED w = π * (θ1/2)2 w = π(25)2, assuming the LED half angle is 25° w = π(.43633)2, convert degrees to radians .598 Step 2.) Calculate Lumens f = Iv * w f = 2.00 * .598, assuming the LED brightness is 2000mcd f = 1.196 Lumens Although empirical calculations are possible for converting many different types of photometric units, the actual measured value may differ from the calculated value due to variation in the spatial radiation characteristics of the LED. In most cases, the empirical calculation is sufficiently accurate. Additional photometric conversions are shown in figure 3. Although there are myriad other conversions that are possible, for example candela to nit or lambert to candela, there is no easy direct multiplication factor that can be used. Information such as the area of the source and/or detector, or the measurement distance and angular characteristics may be required. The photometric measurement of LEDs can be more of an art than an exact science. There are various geometry, electrical and assembly issues that can greatly affect the optical properties of LEDs. Because no two LEDs are exactly alike there are steps that will greatly enhance the accuracy of your measurement. These include but are not limited to:

Radiometry Radiometry refers to total radiation or the measurement of all light whether in the visible, infrared, or ultraviolet spectrum. The basic unit of radiometric optical power (Radiant Power) is the watt (W). The watt is an absolute unit because it is independent of wavelength. One watt of infrared light contains as much power as one watt of visible light. Other radiometric terms that are commonly measured are radiant intensity (Watts/Steradian), Irradiance (W/m2) and Radiance (W/m2 sr). The primary method for measuring total radiant power/luminous flux is by using an integrating sphere.(See figure 5) The integrating sphere measures light emitted from the LED in all directions. Generally these measurements are independent of viewing angle and not subject to angular measurement inaccuracies seen when testing photometrically, however, errors are still possible. Sphere diameters of approximately 3 and 6 inches are widely used. If accuracy is critical, the larger diameter types are preferred due to the favorable ratio of the sphere area to the size of the LED and ports, however, this also results in a loss of intensity. A major source of measurement error has been where to position the LED inside the integrating sphere. The latest specification adopted by the CIE , Publication 127, states that the entire package of the LED should be inside the sphere which is called a 2 luminous flux measurement. The same precautions used for measuring LEDs photometrically should also be followed when making radiometric measurements. As with photometric conversions, there are a myriad of radiometric conversions that are possible given the appropriate information. Radiometric values are normally required for applications used in conjunction with a photo detector such as in fiber optics, scanning or sensing.

Colorimetry The scientific measurement and quantification of LED color is called Colorimetry. Its units are typically given as chromaticity coordinates or in wavelength. Color perception is very complicated because it not only depends on the various physical properties of light but also on things such as surrounding objects, the devices mechanical properties, the viewer’s eye response as well as their psychological state. The CIE has established standards for the measurement of visible light as it relates to the “standard human eye response.” This so called standard observer curve was first established in 1931 (see figure 6a). From this curve, the tristimulus values for accurately defining a color are obtained. The X, Y, Z tristimulus system is based on the assumption that every color is a combination of three primary colors; red, green and blue. The 1931 CIE Chromaticity Diagram (see figure 6b) is derived from the tristimulus values by the following: x = X/(X+Y+Z) or x = Red/(Red + Green + Blue) y = Y/(X+Y+Z) or y = Green/(Red + Green + Blue) Since (x + y + z) =1, the third axis, z = 1 – (x + y) 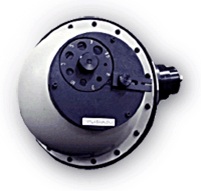 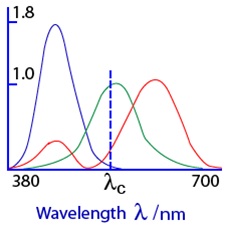 The chromaticity coordinates are normally specified by the x and y axis only. In general, most specifications provided by LED manufacturers do not list the chromaticity coordinates, but rather the peak and dominant wavelength (unless the LED is white). The dominant wavelength, specified in nanometers, is obtained from the color coordinates discussed above. It is essentially the color that is actually perceived by the human eye. The peak wavelength is the wavelength at the maximum spectral intensity. The peak value is easy to obtain and is therefore the most common value specified by LED manufacturers, however, it has little practical significance for applications that are viewed with the human eye since two LEDs may have the same peak wavelength but can be perceived as different colors. Currently, the most accurate method for measuring color is by using a Spectroradiometer. This device performs a complete spectral power distribution of the source being measured from which all photometric, radiometric and colorimetric parameters can be mathematically calculated. The wavelength accuracy of the equipment should be better than 0.5nm with 0.1nm preferred. As mentioned previously, there are several factors that can affect the value obtained. One of these is temperature. As the ambient temperature rises, so to does the LED wavelength. This increase will typically be from 0.1nm/°C-0.2nm/°C depending on the type of LED used. Goniometric / Angular Characterization The final topic for discussion is goniometric or angular characterization. A Goniometer is a device that measures the spatial distribution or radiation pattern of an LED(see figure 8). This can be accomplished by either moving the detector around the LED or by tilting the LED while the detector remains stationary. In either case, several output measurements are taken for each angle as a rotation from 0°-180° is performed. Upon completion, a profile of the radiated beam in one plane is obtained. It is often assumed that since most LEDs are round, the radiation pattern is symmetrical. This even seems to be indicated by the graphical representations of viewing angle provided by many LED manufacturers. This is often not the case. As mentioned previously, the geometric and assembly variations that occur during the manufacturing of LEDs can greatly affect its optical properties. It may be necessary to perform an additional scan and record multiple planes of view. In addition, some special shaped LEDs such as the oval or elliptical type, essentially have two radiation patterns (30° x 70° for example), therefore, both a 0° and 90° scan of the device is necessary. If a goniometer is not readily available, it is possible to obtain a crude radiation pattern by using a photo detector and manually rotating the LEDor detector, recording the output levels and plotting the data points, however, this can be very tedious and time-consuming. It should be clear from what has been discussed that the measurement of light can be highly inaccurate compared to other more specific electrical characteristics such as voltage, current or resistance. There are many factors such as color, device geometry, alignment of the LED into a test fixture, temperature etc. that can induce measurement error. It is often classified as being more of an art than a science. Although a measurement accuracy of ±5% is still considered standard and widely acceptable in the industry, with careful attention, accuracies of better than ±2.5% are possible.