Back to Technical Articles
Ultraviolet light occurs between the visible and x-ray spectrums. The Ultraviolet wavelength range is specified as 10 nm to 400 nm; however, many optoelectronic companies also consider wavelengths as high as 430nm to be in the UV range. Ultraviolet light gets its name due to the “violet” color it produces in the visible portion of the spectrum although much of the output of UV light is not visible to the human eye. 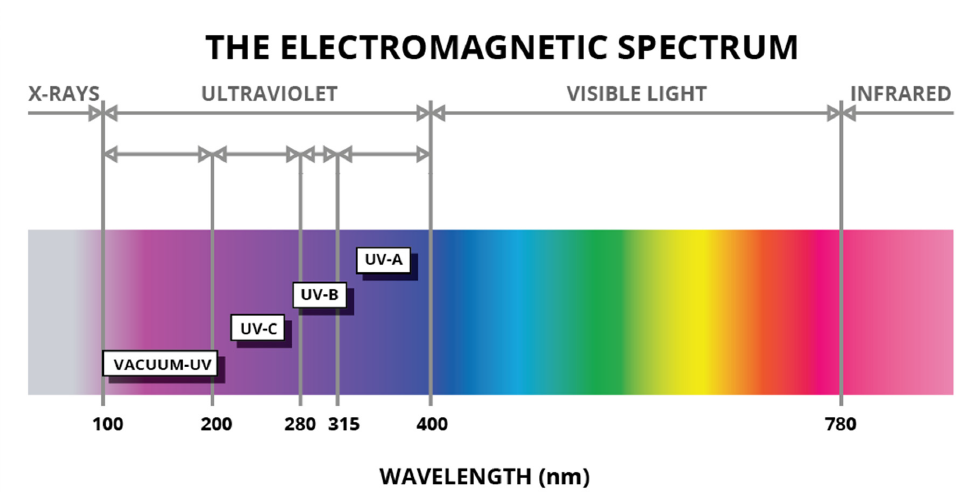 UV LEDs have seen tremendous growth over the past several years. This is not only the result of technological advances in the manufacturing of solid state UV devices, but the ever increasing demand for environmentally friendly methods of producing UV light which is currently dominated by mercury lamps. The current offering of UV LEDs in the optoelectronics market consists of product ranging from approximately 265nm – 420nm with a variety of package styles including through-hole, surface mount and COB (Chip-On-Board). There are many unique applications for UV LED emitters; however, each is greatly dependent on wavelength and output power. In general, UV light for LEDs can be broken down into 3 general areas. These are classified as UV-A, UV-B and UV-C. (See Chart below)   Applications The “upper” UVA type devices have been available since the late 1990s. These LEDs have been traditionally used in applications such as counterfeit detection or validation (Currency, Driver’s license, Documents etc) and Forensics (Crime scene investigations) to name a few. The power output requirements for these applications are very low and the actual wavelengths used are in the 390nm – 420nm range. Lower wavelengths were not available at that time for production use. As a result of their longevity in the market and the ease of manufacturing, these type LEDs are readily available from a variety of sources and the least expensive of all UV product. The “middle” UVA LED component area has seen the greatest growth over the past several years. The majority of applications in this wavelength range (approximately 350nm – 390nm) are for UV curing of both commercial and industrial materials such as adhesives, coatings and inks. LEDs offer significant advantages over traditional curing technologies such as mercury or fluorescent due to increased efficiency, lower cost of ownership and system miniaturization. The trend to utilizing LEDs for curing is increasing as the supply chain is continually pushing to adopt LED technology. Although the costs of this wavelength range is significantly greater than the upper UVA area, rapid advances in manufacturing as well as increasing volumes are steadily driving down prices. The “lower” UVA and “upper” UVB ranges (approximately 300nm – 350nm) are the most recent introduction to the market place. These devices offer the potential to be used in a variety of applications including UV curing, biomedical, DNA analysis and various types of sensing. There is significant overlap in all 3 of the UV spectral ranges; therefore, one must consider not only what is best for the application, but also what is the most cost-effective solution, since the lower in wavelength, typically the higher the LED cost. The “lower” UVB and “upper” UVC ranges (approximately 250nm – 300nm) is an area that is still very much in its infancy, however, there is great enthusiasm and demand for this product in air and water purification systems. There are currently only a handful of companies that are capable of manufacturing UV LEDs in this wavelength range and even a smaller amount that are producing product with sufficient lifetime, reliability and performance characteristics. As a result, the costs of devices in the UVC/B range are still very high and can be cost prohibitive in some applications. The introduction of the first commercial UVC LED based disinfection system in 2012 has helped to move the market forward to where many companies are now seriously pursing LED based products. Precautions A common question regarding ultraviolet LEDs is: Do they pose any safety risks? As described above, there are different levels of UV light. One of the most commonly used and familiar sources for producing UV output is the “black light bulb”. This product has been used for decades to produce a glowing or fluorescence affect on specific types of posters as well as for other applications such as the authentication of paintings and currency. The light being produced by Understanding Ultraviolet LED Applications and Precautions

these bulbs is typically in the “upper” UVA spectrum which is nearest in wavelength to the visible range with relatively low energy. This portion of the UVA spectrum is the safest of the three various spectra of UV light, although high exposure has been linked to skin cancer in humans as well as other potential issues such as accelerating skin aging. LEDs (as opposed to standard incandescent or fluorescent type bulbs) are also highly directional with very narrow viewing angles. Looking directly into a UV LED can be harmful to the eyes. It is best to limit exposure to UVA producing product. The UVC and much of the UVB spectrums of light are primarily used for germicidal and sterilization purposes. Light produced at these wavelengths are not only harmful to micro-organisms, but are dangerous to humans and other forms of life that may come in contact with it. These LED lamps should always be shielded and never be viewable to the naked eye even though it may appear that little or no light is emanating from the device . Exposure to these wavelengths may cause skin cancer and temporary or permanent vision loss or impairment. All UV devices should have warning labels similar to the label shown below (provided by Marktech Optoelectronics). In addition, prior to purchasing a UVC or UVB LED, many manufacturers requires that each customer sign a document stating they understand and agree to the precautions regarding the use and handling of these products.

By Vincent C. Forte – January 2014 Vincent is Chief Technology Officer of Marktech Optoelectronics in Latham, New York. He has been in the optoelectronics field for nearly 30 years and has authored or co-authored several articles relating to LED technology. Many significant enhancements to LEDs and their applications have directly resulted from Vincent’s input and hands-on experience