Recent improvements have reduced the tendency for LED lamp luminosity to decline with use. The results of long-term studies of longevity characteristics now show that the luminosity need not always attenuate. The decline in luminosity that occurs during use has been evaluated using a Wiebel distribution function. Sometimes, even after thousands of hours of longevity testing, the M-value does not change thousands of hours (see Figure 19). REL Luminosity Residue vs Time 2 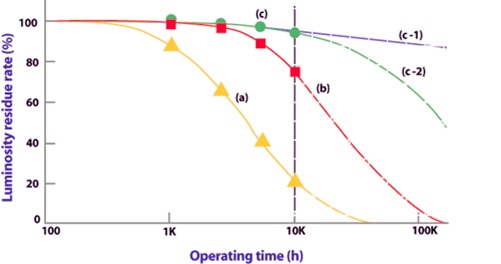 With the tendency for luminosity to deteriorate already confirmed by the results of long-term longevity tests in Figure 19 (a) and (b), longevity can now be predicted relatively easily. However, in Figure 19 (c), no deterioration is seen, even after 10,000 hours of use. It is not possible to decide whether deterioration proeeds in the (c-1) direction or the (c-2) direction. In some cases, the deterioration in the M-value is large after a certain point, as in (c-2). The absence of luminosity reduction during longevity tests does not mean that the LED lamp will not deteriorate at some point in its life. When determining the location in which a piece of equipment incorporating an LED is to be used, if necessary perform longevity testing under accelerated conditions, so as to predict the longevity characteristics based on the actual conditions of use.