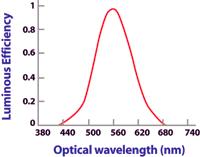 Either use the luminous efficiency curve to correct the LEDs’ output for each wavelength to be measured or pass the LEDs’ output to be measured through an optical filter with the same transmission characteristics as the luminous efficiency curve. Naturally, it is also necessary to take into account the wavelength characteristics of the photodetector. Photodiodes or CCD image sensors are sometimes used in photodetectors for checking luminosity. In these cases, the difference between the luminosity of visible LEDs is not simply due to the differences in the sensitivity of their photodetectors. For example, a simple comparison between the luminous intensity of a 660-nm GaA As LED and that of a 570-nm InGaAlP LED shows that the latter has a luminous intensity than the former. However, taking into account the wavelength characteristics of the reception sensitivity of photodetectors with photodiodes or CCD image sensors, the 660-nm GaAlAs LED has the higher output. In addition, the wavelength characteristic diagram in the technical data shows only the visible light spectrum and does not indicate that no other light is emitted from the LED. In particular, depending on the type of LED, the emission may have a large peak in the near-infrared area. When using photodiodes to measure luminosity, do not forget to take infrared light into account.