Back to Application Notes
LED lamps emit different colors, wavelengths, depending on the materials they are made of. LED lamps based on public standards, for example, LED lamps for specialized traffic signals or automotive stop lamps, frequently use a standardized bulb as the light source. For such applications, select the LED lamp that satisfies the wavelength specifications. Peak and Dominant Wavelength Two wavelength standards exists, the peak wavelength and the dominant wavelength. The latter corresponds to the color actually perceived by the human eye. When selecting an LED lamp for most applications, the range of possible wavelengths is wide. The designer should select the LED lamp whose wavelengths is most suitable LED lamps for his or her needs. Standards for LED wavelength selection have recently changed because of developments in luminosity. In the past, the only high-brightness LED lamps available were red GaAlAs LEDs and green GaP LEDs. It was therefore necessary to select one of these for outdoor high-brightness indicators. High-Brightness LEDs Recently, InGaAlP high-brightness LEDs have become commercially available. In addition to red leds and green leds, high-brightness orange and yellow LEDs are now available. As a result, orange LEDs, amber LEDs and yellow LEDs are now widely used in highway LED panels and on the displays of low-current portable equipment which requires high-brightness characteristics. 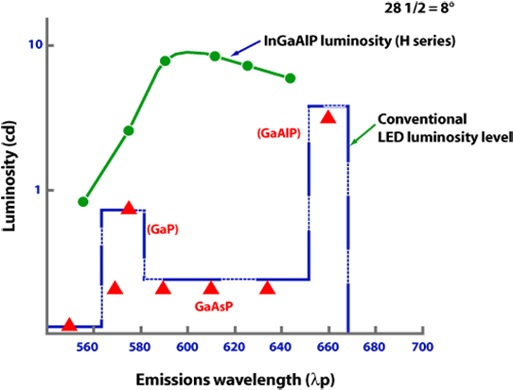 Relationship between emission wavelength and luminosity for modern LED lamps. Directional Characteristics As described above, the same LED chip can be used in the products of different LED manufacturers so that a lamp has different directional characteristics. Table 1 provides a list of useful criteria for LED lamps. (reference value).